OUR FOUNDRESS: MOTHER TERESA OF CALCUTTA 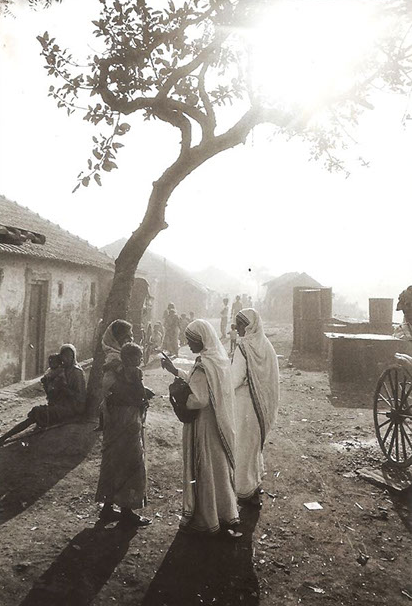 OUR HISTORY:
“Our Lord wants Indian nuns, victims of His love,
who would be so united to Him as to radiate His
Love on souls - who would lead Indian lives,
dress like them, and be His light, His fire
amongst the poor, the sick, the dying, the
beggars and the little street children.”
Mother Teresa of Calcutta
On 10 September 1946, Mother M. Teresa (a
Loreto nun at a time) received an inspiration
from God to found a new congregation devoted
to the service of the poorest of the poor. After
obtaining the approval of the Archbishop of
Calcutta, Ferdinand Perier, S.J., and the
permission of Holy See (Vatican), Mother Teresa
left the Loreto convent in August 1948 to begin
her new work among the poor in the slums of
Calcutta. The first 12 young women, most of
whom knew her as she had been their teacher
and head mistress, followed in her footsteps
and soon become known as the “running
congregation” in Calcutta slums. On 7 October
1950, Archbishop Perier, S.J. erected the
Missionaries of Charity as a diocesan
congregation, for the Archdiocese of Calcutta.

Mother Teresa began to visit the poorest of the poor in
their homes and on the street, to care for the sick and
the dying, and to gather and teach little street children.
She opened slum schools, medical dispensaries and food
distribution centers. In 1952, Mother Teresa opened
“Nirmal Hriday” (Immaculate Heart), the first home for
the dying destitutes; in1955, she opened “Shishu Bhavan”
the first home for the abandoned children and
in 1957 the first mobile leprosy clinic. Her first mission
outside Calcutta was in Ranchi in 1959. Throughout the
1950s and early 1960s, Mother Teresa expanded the
work both in Calcutta and throughout India. In 1965
when she and her “little band” courageously embarked
on a first mission “abroad” in Cocorote, Venezuela; very
soon followed foundations on all five continents. At the
time of Mother Teresa’s death in 1997, there were 3914
sisters in 594 missions in 123 countries
Various works developed as she endeavored to meet the
needs of the poorest of the poor around the world. In
time it included homes for them, those who had TB,
those physically and mentally challenged, those
suffering with various mental illness, AIDS patients,
night shelters, soup kitchens, homes for the unwed
mothers and mothers with children in difficulties,
afterschool programs and summer camps for the
children from the poor families, and so on.